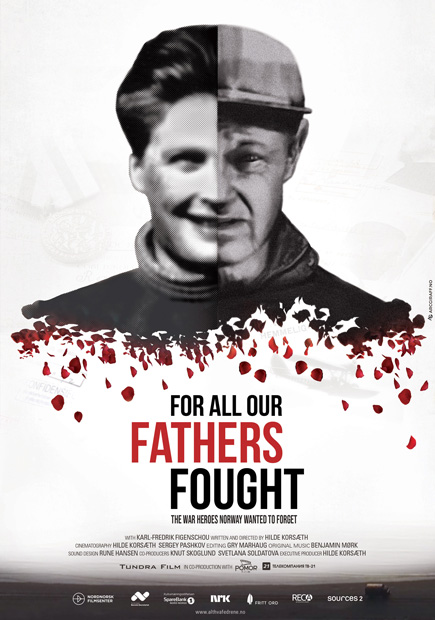 FOR ALL OUR FATHERS FOUGHT

A documentary about wounds from war and cold war, sacrifice and betrayal, and about people trapped on the borderland between the politics of East and West.

It is also a story about a son's search for the truth about his father in order to make peace with painful memories.

Read more about For All Our Fathers Fought 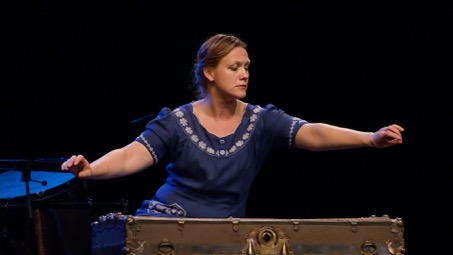 An opera-documentary about the partisans in Northern Norway who fought for the Soviet Union during World War II. But the USSR turned out to be the wrong ally. The partisans ended up being forsaken by their employer, as well as their motherland, creating wounds that have yet to be fully healed.

Read more about The Kiberg Odyssey

(MY BELOVED is) The story of two people at the intersection of mature love and serious illness early in life. The distinction between past, present, and future are blurred when a 51 year old is diagnosed with Alzheimer's disease.

Read more about My Beloved 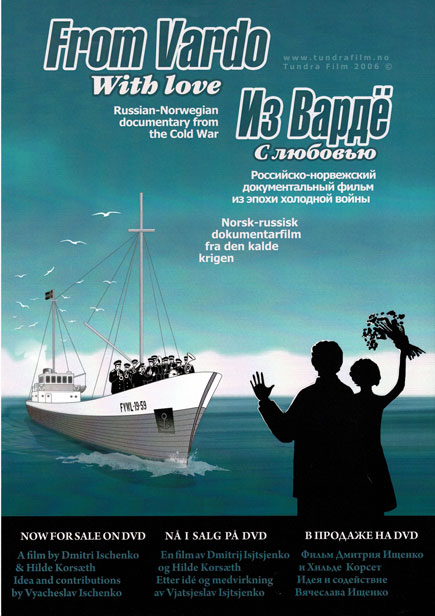 FROM VARDØ WITH LOVE

In 1959, a little brass band from the island of Vardø in Northeastern Norway decided to make an adventurous journey. Without a visa and with a hearty contempt for bureaucracy and Cold War, Vardø Town Band started out in a fishing boat to visit their Soviet neighbours in Murmansk, SSSR. It turned into a journey they would never forget, and which came to have far-reaching consequences.

Read more about From Vardø With Love

This is Hilde Korsæth’s documentary about two businesswomen and their collaboration across a border dividing two of the world’s most dissimilar sets of living conditions. We meet two courageous protagonists who allow us to follow very closely what happens
during their first year of collaboration.
Produced by: Tundra Film 2002

A portrait of a Russian music teacher

Documentary about the illegal Norwegian surveillance of the Sami people.
Filmed and edited by: Hilde Korsæth
Directed by: Johs Kalvemo and Hilde Korsæth
Produced by: Norwegian Broadcasting Company (NRK) Sami 2002.
Shown on NRK and SVT in 2002, at the Barents TV Festival 2002 , The Nordisk Panorama Filmfestival 2002 and Skabmagovat Indigenious Peoples` Fìlm Festival 2003 in Inari in Finland.
Contact: www.nrk.no/sami/

Canadian documentary about human adaptation to the cold in the North.
Researched and filmed in the Northern Cap by: Hilde Korsæth
Directed by: Andrew Gregg
Produced by: 90th Parallel Production/Canadian Discovery, 2001.
Shown on the Discovery Channel in 2002.
Contact: www.90thparallel.ca   (info@90thparallell.ca)

Swedish documentary about Soviet female pilots who flew bombing missions during World War II. They  belonged to the only regiment in the world where all the combat pilots where women. They were about twenty years old when they volonteered. The Germans called them the Night Witches. They learnt how to fly during the night, how to load the plane with bombs, and how to bomb German troops. They did even more combat missions than their male colleagues. The pilots, navigators, mechanics, technicians - all were women. They had ten Commandments. The first was: Be proud you are a woman


Dear Vera – in memory of you
( Kjære Vera - til ditt minne)

Swedish documentary about the Russian partisan Vera and her tragic fate during World War II.
Filmed by: Hilde Korsæth
Directed by: Gunilla Bresky
Produced by: röda leppar/Filmpool Nord/Swedish Television (SVT) 2002.
Shown on SVT in 2002 and at the Barents TV Festival 2002.
Contact: gunilla.bresky@sr.se


Tamils of the Tundra

British feature on Tamils living in the arctic town of Vardø. During the 1990s Tamils made up 10% of the population of Vardø, and were a central element of the fishing industry.
Researched and filmed by: Hilde Korsæth
Directed by: Robert Stern
Produced by: Litmus Films, 2000.
Distributed by: APTN
Contact: info@litmusfilms.com